The local natural gas utility distribution company had a 24-inch main pipeline valve fail. Player and Company installed the 24” block valve along busy South Deshon Road in Lithonia, Georgia. Pre-job activities consisted of obtaining operator qualification (OQ) certifications for Player and Company personnel, and the creation of shop drawings for fabrication. The shop fabrication was conducted under intense observation by the customer’s inspector. Player and Company qualified pulse-arc and gas metal-arc welding (GMAW) procedures according to API Standard 1104 Welding of Pipelines standards to be utilized for the shop fabrication. Multiple welders were then qualified on the GMAW procedures. All shop welds passed 100% radiographic testing (RT) performed by a third-party testing company.

While the shop fabrication was being conducted, Player and Company cleared and graded the job site on South Deshon Road. The shop fabricated pipe spools were transported to the job site for field installation. The pipe spools were assembled and welded using a shielded metal-arc welding (SMAW) procedure previously qualified to API Standard 1104 Welding of Pipelines standards. Player and Company previously qualified welders for this weld procedure. All field welds passed 100% radiographic testing (RT) performed by a third-party testing company. 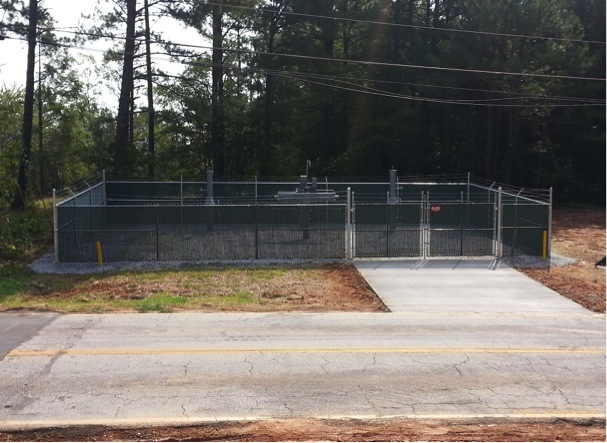 Player and Company excavated the job site to a depth of 10 feet and set the large 24” pipe and valve assembly underground on next to South Deshon Road. The two road crossings, one for the inlet to the 24” valve and one for the outlet, were excavated. This excavation involved closing one lane of South Deshon Road at a time. As the excavation was being accomplished, speed shoring was installed to maintain the integrity of the road so that traffic could continue to safely pass.  The pre-tested and pre-coated inlet and outlet piping were slid underneath the road plates through the excavation while traffic continued to steadily flow on South Deshon Road. Player and Company personnel were protected by shoring as two 24” welds were completed 10 feet below normal grade. The welds were tested radiographically, sandblasted, and coated.

In preparation for the final tie-ins to the existing 24” main, two 24” stopples were installed to interrupt natural gas flow. Shoring was installed around each tie-in and two welding crews cut the section of main out of the way. Two long radius 24” 90 degree elbows were fit to the main and the new piping underneath the road in preparation for welding. The two welding crews welded the tie-ins simultaneously. The four tie-in welds were radiographically tested and the stopples were removed to restore flow to the 24” main. This tie-in work was performed in one day in order to keep the natural gas flow interruption to a minimum.

The final tie-in welds were sandblasted and coated for underground protection. The tie-in pie sections were holiday tested for coating defects, and backfill of the entire job site began. Once the backfill was complete and the road plates removed, the road and site was restored to its original condition. The finishing touches for the project involved installation of a security fence, laying of geotech fabric, and spreading of gravel base. A vehicle access concrete driveway was poured.

© 2022 Player and Company. All Rights Reserved.